kNIGHTWING01 posted on YouTube his theories on the game. He said that Hush might have a major role, and because he disguised as Bruce Wayne and Rocksteady COMPLETELY left off the character. Since, Scarecrow is returning from the sewers that had Venom and TITAN, he might return as a hulking brute like Bane or Grundy.

The story of Scarecrow was when in Batman: Arkham Asylum, Killer Croc supposesdly killed him and drowned him. Although, throughout Batman: Arkham City, two hints of Scarecrow alive were hinted in the game. 1. His mask appeared ripped up. 2. In a Sail Barge, there was a release form or something with Jonathan Crane's signature. The true revealence of him being alive was in the end. Near the Barge, there was a TITAN canister floating in the ocean. Scarecrow's arm pops out of the water and grabs the TITAN canister. This revealed him being a Hulking figure due to the TITAN mixed into the ocean.

MY thoughts about Arkham Knight (character) is that Scarecrow built him from scratch with robotic equipment, like Real Steel. After Scarecrow is defeated, Bats will think it's over, but Arkham Knight appears and challenges Batman.

From what we hear, Batman or SOMEBODY will be killed off. It says this game is the conclusion to the Arkham Trilogy, so Batman will at the very least be badly injured.

What many people hope is that after the release of this video game, Arkham Knight will make an appearance in the comics or any shows. Hopefully, he will be in the Gotham TV series based on Gordon's earlier policeman days, along with Penguin and Catwoman.

There is a way that Joker can return, since he died in Arkham City. One way is that if Arkham Knight is not a robot thing, then he will unmask himself and reveal himself to be Joker. (that would be terrible) If that happens, then Joker will be the main villain four games in a row. Another way is the best way yet. Joker could appear in a vision, after Scarecrow blinds Batman with Fear Gas. He will be in a dream and fight Batman.

Two pieces of info leak Jason Todd/Red Hood to be Arkham Knight. One is how he says to Scarecrow "you'll never understand" about what Batman did to him. (let him die) The other is that he knew that Batman's logo was bulletproof, so he told his henchmen not to shoot it.

A Harley Quinn DLC will be released and players will have until 2024 to download it. Harley is gonna be playable in this.

May the cover be epic.

Rise of the Bat. 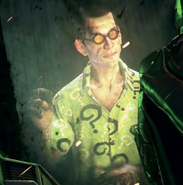 Riddler, having a different appearance than Arkham Asylum and City, also looking nerdy.

The explosively epic showdown between Batman and The Arkham Knight 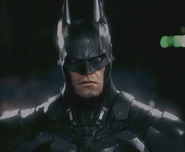 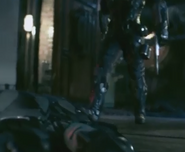 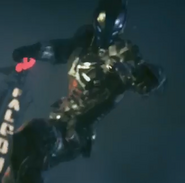 The Penguin
Add a photo to this gallery